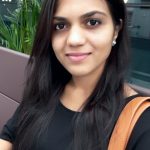 Are you looking for reassurance and strong reasons for doing a German language course?

Here you’ll learn about the advantages, scope, career, and job opportunities of learning German in India. Choosing a new tongue after studying another language is a complex undertaking. However, there are numerous advantages to studying languages.

Career, higher education in the German-speaking zone, immigration, and the pursuit of a long-forgotten passion are all motivators. Whatever your motivation, learning German as a job offers limitless possibilities!

In India, there are ten incredible scopes of German Language Courses.

Is it necessary to study German?

Are you not sure if you should study German?

Don’t worry; I’ve got ten persuasive reasons why you should learn German Language Courses in India.

In addition to Germany, it is also spoken in other countries. There are official German-speaking countries in Germany, Austria, Switzerland, Liechtenstein, Belgium, and Luxembourg.

It is spoken by roughly 100 million native speakers and 185 million people worldwide.

In addition, it is one of the most widely taught foreign languages.

It is also a lingua franca in Central and Eastern Europe.

One of the essential motivators for learning a foreign language is a career.

They are engineering world leaders.

The ability to speak German has opened up career opportunities in India for those involved in medical and healthcare, education, logistics, automobiles, utilities, entertainment, tourism, information technology, financial services, and outsourcing.

You might advance in your career if you have German language skills on your CV at many international corporations.

Several international corporations with operations in India are looking for people fluent in German. A German Language Courses degree increases your employment prospects in India and with German and global companies abroad.

The demand for professional German translators, interpreters, proofreaders, content writers, and trainers is always high. Jobs at the German embassy in New Delhi and the consulates in Mumbai, Chennai, Kolkata, and Bangalore are also available. The German language’s breadth is expanding.

Assume your company does business with German companies or partners or is attempting to grow its footprint in Europe. In that scenario, it will aid you in developing good contact with them and, ultimately, success. It would also surely boost your professional relationships.

4. Study or work in Germany, Austria, or Switzerland.

There are so many ideas and inventions in Germany. The country offers a wide range of bachelor’s, master’s, doctoral, and post-doctoral degrees in German Language Courses.

Employers respect their degrees all over the world.

Germany’s universities are regarded as among the greatest in the world. You’ll graduate with an internationally recognised degree, offering you excellent employment chances worldwide.

Because the states subsidise higher education in German Language Courses, most of its academic institutions, including those for international students, are free.

It’s no surprise that students, scholars, and researchers flock to the city. While studying in Germany, you will have numerous research chances.

At the very least, a fundamental understanding of German Language Courses is required.

It will assist you in finding part-time jobs, internships, or planning to work in Germany after completing your German Language Courses education.

Knowing German will be helpful if you plan to travel to Austria, Switzerland, or other German-speaking countries in Europe. Many Indians travel to these nations in search of work and higher education.

Germany is a pioneer in the automotive and engineering industries. German engineers have a lucrative and promising career openings wherever.

Germans earn well and are entitled to six weeks of vacation every year due to strong economic development and low unemployment. It’s no wonder that they are the world’s largest spenders of tourism dollars.

Every year, millions of German-speaking tourists visit India for sightseeing, but cannot communicate in English. The hotel, travel, leisure, and tourism industries benefit from knowing this West Germanic language.

They may be able to communicate with travel agencies, tour operators, guides, hotels, airlines, and vehicle rental agencies. Their language will gain their business in that instance.

While it is possible to travel through Germany, Austria, Switzerland, and other Central and Eastern European nations without speaking German. For everyone concerned, knowing the language makes travel more meaningful.

By speaking the language, you will get the most out of your experience, earn their respect, and create genuine engagement and connection opportunities.

6. German is a widely spoken language in India.

Some may wonder why they should study a popular topic. Is there a compelling purpose to learning?

Well. Consider the Dutch (another West Germanic language and lingua franca in the Netherlands, Belgium, the Caribbean Islands, etc.).

If you want to learn German Language Courses, more books, teachers, or even speakers are available. When you feel that your development is stalled due to a lack of resources, it can be not very pleasant.

German is India’s second most widely spoken foreign language after French. First Mover Advantage is one of the reasons for this. Their government took the initiative several decades ago to promote German in India.

Kolkata opened its first “Max Mueller Bhavan” in 1957. In reality, in 1914, the first German classes in India were held in Pune and Mumbai (more than a century back). It is India’s second most widely studied foreign language.

There are hundreds of colleges, schools, universities, and language institutes in India, including the German Embassy’s Max Mueller Bhavan, which offers German instruction in Delhi and other regions.

Furthermore, getting a teacher in big cities such as Delhi/NCR, Mumbai, Chennai, Bangalore, Hyderabad, Pune, and others is not difficult.

German-speaking countries have produced some of the greatest literary, musical, artistic, theatrical, and philosophical minds in human history.

Many great works have been published and are still being created in German.

Both Germany and Austria are renowned for their outstanding film and music.

Knowing German allows you to appreciate these artists’ creations in their original, unedited form.

As a result, knowing this language broadens your horizons by providing insight into the way of life and the ambitions and dreams of individuals in German-speaking nations.

8. Are you fascinated by science and technology?

Besides English, it is the second most widely used scientific language.

Over 250,000 German scientists contribute to research and development, making it the third-largest contributor. It also provides international scientists with research grants.

The Nobel Prize has been awarded over a hundred times to talented Germans for achievements in science, including physics, medicine, chemistry, and other disciplines.

It’s no wonder that it’s the world’s second most innovative country.

Some of the most notable scientists from the German-speaking world include Einstein, Kepler, Röntgen, Planck, and Virchow.

Their scientists have often demonstrated their ability to innovate throughout history. This is still the case today.

9. On the Internet, Germany has a strong presence.

It is one of the most commonly written languages on the Internet, after English and Russian. Because many vital websites are in German and are available worldwide, knowing German gives you more access to information.

It also grants you access to 17 million other websites. But unfortunately, it excludes German websites ending in.com,.net,.org, and.info, as well as many others.

10. It’s not so difficult to learn German Language Courses.

German and English are from the same West Germanic family of languages.

You have an edge if you know English, Dutch, or any Scandinavian language or plan to study them.

Both share thousands of “cognates,” or closely related words and phrases.

After all, it’s not that difficult.

Many people believe it is challenging.

I believe that any language is either more difficult or simpler to learn.

The German language proficiency test B2/C1 can be passed in 2-3 years if you are dedicated and willing to work hard. You need persistence and a positive attitude.

Non-Germans are often told that the German Language Courses is difficult to understand and learn. However, even if this is somewhat true, it should not discourage others from studying it. Furthermore, every language in the world presents a difficulty to unfamiliar persons with it.

Language learning can be done for personal, professional, or academic reasons. However, to appreciate the essence of the German language, you should also learn it from a cultural standpoint.

As a result, most online German language courses include cultural classes alongside traditional ones. These courses will help you understand grammar and other important issues to handle the German language better.

However, you must select the course that best suits your needs and timetable.

Furthermore, your motivation for learning German is critical. Therefore, if you are looking to learn German, you will be able to locate the correct course for you within your budget.

Learning a language or a cooking recipe must be effortless.

Humans have the ability to develop and spread languages across borders. However, we are also the ones who, in the past, began creating barriers between communities.

Languages are thus a gift to humanity to maintain peace and communication for the advancement of our species. And we must do so responsibly for as long as possible.

Ans. German is a member of the family of Germanic languages. The English language belongs to the same clan. As a result, nearly no Germanic language has much in common with English. However, for English speakers, the German language is the easiest to master.

Q2. Why should you learn German Language Courses?

Q3. What are the various German language Courses levels?

Q4. Can we use these courses to prepare for German language Courses examinations?

Ans. The courses listed above will equip you with the necessary information and training to take any generally accepted German language exam. Furthermore, some schools provide specialised instruction just for particular exams.

Q5. What are the most widely accepted German language Courses exams?

Q6. What are the many exercises used in German language Courses instruction?

A writer with wings. I love to explore new things from a new perspective! 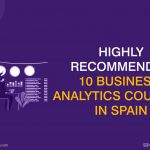 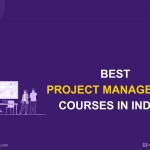 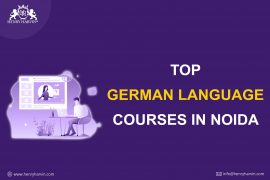 10+ Best German Language Institutes Near me in Noida with Fees, Duration, Levels & Certification 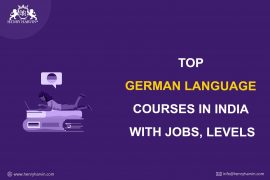 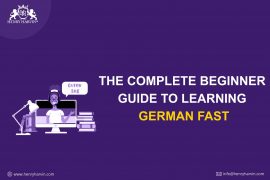 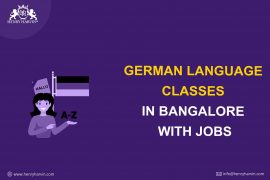 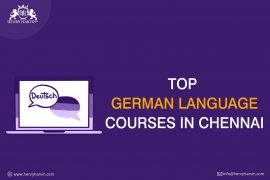 Best German Language Institute in chennai with Fees and Duration 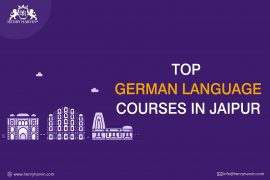